This first monograph by Laure Catugier explores the study she has been conducting for years on the spread of modern architectural standards on an international scale.
It is a hybrid publication: a digital book (EPUB), containing critical texts and travel diaries (sound and visual), and a printed, folded book-object.
The title “Architecture is Frozen Music” evokes the idea of a partition, a staff where the lines indicate the pitch of the sound. The structure of the book is freely inspired by a “Lines: A Brief History” (Routledge, 2016) in which the anthropologist Tim Ingold develops the idea that “a study of men and things is a study of the lines of which they are made”. Walking, writing or creating is, according to him, part of a “factory of lines”.
In concrete terms, the book will include an analysis of the work through critical texts, visual and sound diaries. These “travel” or “residence” notebooks will present visual, sound and dreamlike motifs along straight, curved and broken lines. The collection of forms, materials, colors and volumes built up over the years by the artist will be associated with the stories and sketches that accompanied their genesis. The idea is to propose several paths through the whole composition, and thus to make us feel the correspondences, the ineptitudes, the movement that inhabit these forms, between equivocal symbol and banal everyday object. The artist’s book completes an aspect that the ebook cannot satisfy: the spatial experience. Indeed, in this work, playing with visual perception is a fundamental aspect, and it only works if you move in space.
The book-object is built on the “Open Form” theory of the Polish modernist architect Oskar Hansen. The issue here is to avoid any hierarchy, which is why there is neither beginning nor end, nor reading direction: the usual order of the book is reverse.
Inside a folded cardboard cover, the pages overlap, creating threads through the crossing and superimposition of lines. The vision is thus disturbed by unexpected “collages”.

Supported by :
This artist book has been co-published within the program Exercising Modernity organised by the Pilecki Institute Berlin.
With the kind support of the Bureau des arts plastiques of the French Institute Germany and the French Culture Minister
This book has also received the generous support of OFFCITY, Paradubice, Czech Republic – www.offcity.cz
and the Marc Fassiaty Video Fund, Paris – www.fassiatyvideofund.com 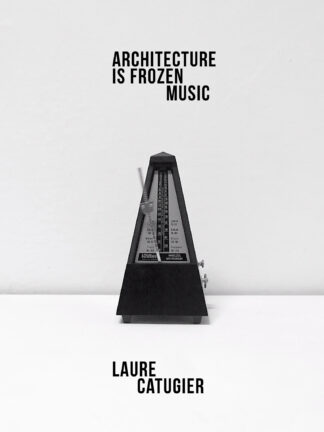 You're viewing: Architecture Is Frozen Music 4,99 €
Add to cart