This publication takes as a starting point the performance of the artist Ingrid Hora “Sheibenscheiden-Tosatonda” which took place in September 2017 in South Tyrol.
Our book retraces both the process of the performance through images, soundtracks, videos and an interview ; but it also develops the context of the realization of the work and the questions it raises. Elena Basteri, who directed the dramaturgy of the performance, offers, through various quotations, an open reading on the issues that underlie the artist’s work.

The Scheibenschlagen (disc flinging) is an ancient tradition that takes place annually on the first Sunday of Lent. From pagan origin, the tradition has been preserved in the Vinschgau (the western area of South Tyrol), to this day: shortly before dark, the men move to the hills above the villages and erect a tall, cross-like construction, a post wrapped in straw, the so-called Hex. Under loud clamour, in order to chase away demons, a fire is lit. In this fire the men place round wooden discs that are tied to rods. As soon as the discs are smoldering, the Scheibenschläger(disc flingers) throw the glowing discs, accompanied by spells and wishes, far beyond the valley. The more beautiful and further the discs flies, the more luck it will bring. The ritual is used to drive away winter and bring a fruitful harvest. Emblematic of the symbolism of fertility is the Hex, whose crossbeam and struts represent the symbols of femininity. 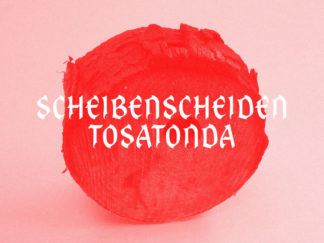